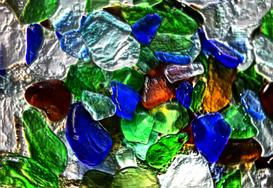 Fiona heard Roger come home, recognized the soft thud of his suitcase tossed on the bed.

“Fiona? Where are you, Darling?” He joined her on their bedroom balcony, wrapping his arms around her and kissing the top of her head. “Of course. Out here listening to the whispers of the sea again?”

“I’ve brought you something back from Ireland.” He kneeled down in front of her.

Fiona pulled her watery green eyes from the ocean to stare at his outstretched hand. Surprise reshaped her mouth.

“It’s sea glass. I thought of you the moment I saw it.”

Fiona reached out and carefully lifted a piece from his palm. A tiny vibration tickled her fingertips. “Oh,” she whispered, the surprise deepening.

“It’s good to see you smile.” He took her hand and slipped the remaining pieces of smooth, cool glass into her palm. “Like emeralds, aren’t they? The same color as your eyes.” He closed her palm around them and kissed her fingers.

Fiona gasped as a more intense vibration moved through her hand, her arm and then branched out to consume her body, warming it from the inside out. The whispers she usually had to struggle to hear were whisked into her mind by the vibrations, suddenly as clear as a bell: Hoooommmmeeee.

Over the next few weeks, Roger watched as his wife blossomed. She stopped spending her days as a lost, sad soul on the balcony and began haunting their marble mansion restlessly. Her voice echoed through the rooms as she sang strange and mystical tunes with a voice so sweet, it made his heart swell, his eyes tear.

‘By fire and wind and sea and rain,

Beloved, he made me

With hands of light,

And feathers of flight

He began to find more and more sea glass; in jars on the kitchen counter, on her nightstand, glittering in the potted plants and even around her neck.

She looked up from making a salad as he stood staring at her on the other side of the kitchen island.

“Yes?” she said, the corner of her mouth pushing up in a seductive smile.

Roger’s heart skipped. “Wow, Fiona, you look amazing.” And she did. Her skin glowed like a pearl, her red hair lay in waves cascading around the curves of her shoulders and her eyes…he could get lost in her eyes. They glittered with ancient secrets and the light of a million stars. Who was this woman? He moved his gaze to the sea glass necklace.

“I’m glad you liked my gift so much, Darling. Where did you get more?”

“Ebay.” Her smile widened and she moved her attention back to slicing cucumbers.

He shivered as he thought about the old village woman he had bought the sea glass from and her broken English warning:

‘In the wrong hands, it will bring out one’s true nature. Connect that person to their imprisoned soul.’

Well, if this was his wife’s true nature, he thought as he looked lovingly upon the gorgeous creature in front of him, then he could live with the old lady’s warning coming to fruition.

Or so he thought.

“Fiona?” he called, peeling off his wet tie and dress shirt. “I’m home. That’s some storm out there, huh?” No answer. Steam was seeping from beneath the bathroom door. “Fiona?” He opened the door cautiously. Through the steam, he could see his wife stretched out in the spa tub, unmoving. His heart did a back flip in his chest. It seemed he was moving in slow motion as he crossed the white tiled floor, tripping over emptied cans of sea salt to stand above her body.

Her eyes were closed, her hair fanned out around her like fire, her skin an eerie green glow. It took him a moment to realize the color was coming from all the sea glass she was laying on. The tub was half full with it. And then he noticed something that horrified him. He could barely take in a breath. His mind struggled to grasp what he was seeing. Falling to his knees, he peered through the water at the large cuts in her abdomen, beneath her ribs. Open wounds so deep he could see the pink of her organs.

“Oh my god, Fiona,” he cried, his hands moving helplessly in the air. Shock giving way to grief. Should he try to lift her? Should he try CPR? Where was the blood?

“What did you do?” And then he cocked his head and leaned closer, his face inches from the water. There was slight movement. The cuts were opening and closing. Almost like she was breathing…

He glanced at her face as her eyes popped opened.  Her lips parted in a grotesque smile that exposed a mouth full of pointy teeth.

Roger screamed and thrashed as she tore flesh from bone, feasting until the twitching stopped and the only sound was the storm still raging outside.

And then she began to sing.