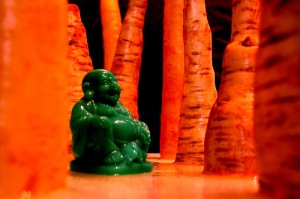 She was dangling at the end of carrot leaves clutched in Jane’s fist, a tiny dirt baby. On her knees in the garden, Jane stared at the doll-like face covered in dark soil; halfway expecting it to inhale and start crying, while knowing this would be impossible. However, when wet bubbles began to form on the bottom lip, it rattled Jane to the core and she almost dropped the creature.  She fell back in the damp soil, still keeping tight grip on those carrot leaves. Opening her eyes, she confirmed she hadn’t gone insane. The baby was there, still swinging in the air.

“Impossible.”  Jane lowered her into the basket, on top of the three or four carrots she had already plucked from the soil. Removing her gloves, she wiped the soil from its eyelids. They fluttered at her touch. Then she brushed the dirt from its neck and chest. Its skin was almost translucent, tinged yellow in the sunlight; thin fibers on its arms and legs glistened as it became animated, opening and closing tiny fists, kicking tiny toes. Jane brushed back the leaves from its forehead, in awe.

Then, in a flurry of fear she crawled, plucking out row after row of carrots, imagining other root babies entombed in fertilized soil. But, thankfully, this was the only one. When Jane peeked back into the basket, the eyes were open. It was staring at her quietly with eyes the color of the sun.

Jane sat at the kitchen table, the root baby still in the basket of carrots, staring quietly back at her. The smell of damp soil permeated the air.

“You know how I was telling you this spring I couldn’t afford Pureorganics seeds?”

“Oh no, Jane, you didn’t buy that genetically modified crap did you?”

“Well…yes. I figured, well how bad could it be, really. Right?”

There was a long silence.

“So, what are you going to do? Raise her and send her off to college? Jane, listen, you grew her in your garden, for food. You plucked her out of the dirt, she…it, is obviously not human. So, what’s the problem?”

Jane had no answer.

“Look, you know Evan Rogers at Knoll Hill Market? If you really can’t eat it, he’ll buy it from you. Sylvia was telling me her brother got some bad GM seeds, ended up with some kind of fish turnips. They smelled awful, but Evan bought ‘em. He specializes in exotic meats.”

Jane felt bile rising in her throat. “I have to go.” She barely made it to the bathroom.

When she returned, the rootbaby had lost her glow, her skin was graying. Was she dying?

Jane frantically offered her milk, the last of her pureed potatoes, water. She refused everything silently.

She turned to the internet for answers. The few hits she got only gave cooking advice, not feeding advice.

Jane rushed her back out into the sunlight. Maybe her energy system was more plant like, she seemed to come alive when exposed to the sun before. In the sunlight, she could see tiny flakes and fissures on the rootbaby’s skin. So dry. She unwound the hose and trickled cool water across her belly and legs.

Her tiny mouth twitched. Was that a smile? The sunlight faded from her eyes and they closed. The animation left her.

Jane turned off the water, the rootbaby now bathed in her tears.

Jane knew she was supposed to call a disposal unit, but she also knew what they would do, the dissection, the tests. That would be worse than being eaten.

She scooped up the tiny body in her palm and held it gently to her chest as she walked back to the garden.