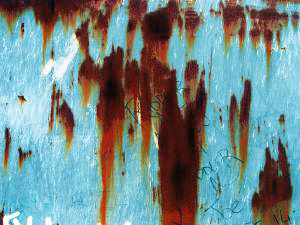 Mona’s brain began to rust first. She would sneeze and spray solid bits of orange into her hand. She began to forget things like where she left her car, if she fed the cat, the fact that she no longer had a cat and, on a rainy Tuesday, she forgot to slip on her pants before walking out to the mailbox.

One day she sneezed and her teeth popped out onto her lap. She screamed, but then did remember she had dentures and this would sometimes happen when she forgot to buy denture cream. She would also need to buy skin lotion, she thought, as she scratched at a patch of brown scales on her arm.

“You should move to Yuma,” her doctor told her. “Low humidity. Will help delay the oxidation.”

Mona scratched at her flaking, cracked lips. “But, how?”

He shrugged. “These things happen.”

Yuma was all limitless sky, blue and more blue. Mona wondered what she was supposed to do with all this limitlessness. It only made her feel more small and insignificant.

In a folding yard chair, she sat, rubbing lotion into her pits and cracks and waited. It took longer to fall apart under a Yuma sky, but she waited patiently.

Her bones became brittle. Her pitted heart groaned at the exertion of pumping and circulating. Her lungs stiffened. The scent of acid and iron swirled around her. She shooed away neighborhood kids as they tried to polish her, thinking they were desert squirrels. Her mind was the first to go.

The Yuma sky began to rust, too, right before it bruised and then was shot through with pinholes. Mona tried to touch the light shining through the pinholes. She couldn’t get her heavy hand to move.

A neighbor rested a washbowl in her lap, mumbling something about being useful to nature. Sparrows and mockingbirds soon came to dip their dusty beaks and feathers. Their beady eyes were curious but unafraid. She knew she had lost her humanity. She was now just a curiosity.

In the silence, only the sharp edge of forgetfulness remained.  She had forgotten to do something. But what?

Her last breath beneath the limitless blue was a soft sigh of relief.

46 thoughts on “Friday Flash: The Woman Who Rusted”