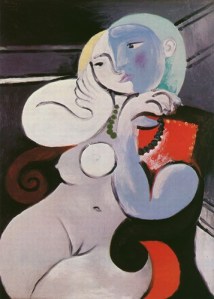 Lou is a girl. She paints angular ladies with red bee-stung lips, wild chocolate hair in the shape of Z’s  with cherry or lemon highlights. They dry on metal racks in the pantry and then they are carefully wrapped and stored in the coat closet.  They haunt her dream world, swaying their hips and laughing wildly. These things are Lou under the spell of starlight and anonymity.

In the sunlight Lou is pressed and varnished, placed at a sharp right angle in a square office.

Gene is a boy. A dreamer. He smokes peyote and gets visits from dead poets and painters. Only they are not dead.  Somehow their space-time overlaps his.  Sometimes he has to help someone off the refrigerator or out of the bath tub. Mostly Cummings and Picasso. Apparently when two dimensions of space-time merge, there is no accuracy involved.

In the sunlight Gene wears tight shoes and stares out of a sky rise window, pretending to crunch the buildings between his teeth like popcorn.

The space between Lou and Gene consists of a hallway and two doors. This space is breached when Gene collapses with an open, foamy mouth and a thump that pulls Lou from her dream world and then her warm bed.

Lou stares at Gene lying there like a chalk outline, seeing him for the first time. She pulls her oversized bathrobe closed and leans down, two strong fingers searching pale skin for a pulse.

She wipes his mouth with a corner of her robe, touches his lips with a finger first and then her own lips. She presses softly against his flesh.

At another point in time, one that has obviously passed, this might have been pleasant.

She vaguely tries to remember if she’s supposed to blow or press first. Then she shrugs, stands and pushes on his door instead.

There are two men sitting there looking vaguely familiar and yet utterly alien in the paper-and-book-strewn apartment.

“He’s dead,” she informs them.

“Okay then.” She unleashes the knot on her robe and lets it slide to the floor. “Show me how to live forever.”

“Come, sit,” Picasso pats the red armchair beside him.

35 thoughts on “Friday Flash: Life, Death & the Space In Between”