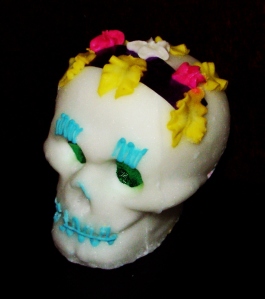 Maria Vega kneels before her husband’s grave, burning herbs in a rusted coffee can. As an offering, baskets full of his favorite food and sugarcane whiskey line his grave.

The night air is sharp and drastically cooler, though the pungent odor of fresh marigolds still hangs heavy around her. Maria slips on a wool rebozo and pulls a blanket over her littlest one, who’s already fallen asleep on her mat. The child stirs briefly as a loud group of tourists—sloshed on tequila—stumble too close, knocking into the decorated arch over her husband’s grave. It wobbles. One slurs an apology before snickering and shushing the others.  In the flash of wide-eyed tourists’ cameras, Maria sighs and resumes her prayers. A bell rings at the entrance of the graveyard. It’s a call to the spirits. She wonders if her husband can hear them.

Among the light of thousands of candles, three men stand behind a knot of swaying tourists and locals, watching the Dance of Old Men play out on a crude wooden stage. They are tall and lithe with pale skin that glows orange in the candle light.

“The bells, the flora, the food…it’s all meant to lead their dead back to them?”

“It is their way of conquering death?”

“To bring the living and the dead together for a night, maybe.”

“No.” The tallest one says. “Come, we will view the fishing men in their butterfly net rituals.”

Chickie sticks his sweaty face in front of the camera just as the flash goes off. He snorts at the tourist’s frustration. “Hey, I got a picture for you, lady!” He shoves a dirty hand between his own legs.

“Come on, Chickie, don’t ruin the fiesta!” His friends lock arms with him and drag him down the hill, through the graveyard laughing and singing loudly. Overturned candles, crushed petals and silent curses lay in their wake.

“Wait, wait…” Chickie says. “I gotta take a piss.” He sways, barely standing. The women and children around the graves look on in horror as his stream falls on one lit candle after another, extinguishing the flames with a hiss. “It’s like shootin’ ducks!” he yells to no one in particular.  He’s mumbling to himself as his friends back into the shadows and disappear.

Maria Vega is staring up at him in disbelief, pan de muerto bread in one hand and the other covering the eyes of her eldest daughter. The three tall tourists have stopped and are surveying the scene. After Maria’s youngest starts to cry, one of them slides forward and bends down next to her. He lays a large hand on the wet dirt on her husband’s grave and begins to hum.  Like some magic trick, the candles flicker back on and Maria feels a slight tremor beneath her.  Satisfied, the tourist stands and returns to his party. They begin to argue.

The bones of her husband, Raul, push through the earth. She falls back, pulling her children with her and frantically crossing herself. Fruit and bread tumble from the baskets, candy skulls are crushed beneath real skeleton feet as it steps forward and brushes the earth from its shoulders.  More screams fill the clear night air as people stumble and flee.

Chickie is standing there with his pants still unzipped and his mouth open, face to face with the inhabitant of the grave he just pissed on.  “What in the hell…”

In the distance the ringing call to the spirits sounds. Raul Vega snaps off the middle finger of his left hand, steps forward and stabs Chickie in the eye. They both collapse in a heap.

Maria Vega faints and the last thing she sees, as her head hits the earth, is Raul’s bleached grin flickering in the candlelight.

23 thoughts on “Friday Flash: Day of the Dead”