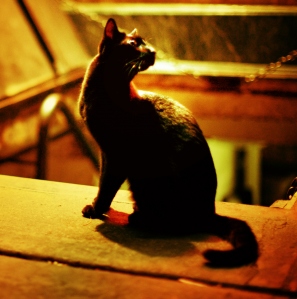 The soft, throaty laugh of my new bride, the steady beat of a tropical October rain on our rented beach bungalow walls, the gurgling of champagne being poured in the candle-lit room…these are the things I heard before the noise in the closet.

A muffled thump, like a sack being dropped on the floor, startled us. Both of us held our breath. I could feel her heart flutter against my arm.

“Did you hear that?” Sarah whispered.

“Shh.” I strained to listen. The candle flickered wildly. A musky scent filled the room, like wet fur.

“What’s that smell?” I turned to her just as a flash of lighting illuminated the fear in her dark green eyes.

“Smells like an animal. Do you think the owner of this place has a cat or something?”

Bump. Thump. The noise taunted me.

She was now trembling. I had to act. There was definitely something moving in the closet.

“Where are you going?” She grabbed my arm as I carefully shifted the sheets off my legs. “Let’s just wait until morning to open it.” Her lip quivered, her eyes shone in the candlelight.

She made me want to be brave. Beauty does that. Probably some damn trick of evolution, keeping the child-bearing women out of danger and sending the replaceable males out to face the beast.

A low growl and loud bang on the door answered me. I jumped back in bed and reached for the cell phone. The candle blew out and we both screamed.

“Sh, sh, it’s okay.” I pressed the buttons, hitting ‘back’ numerous times as my shaking hand refused to cooperate. The deep rumble of thunder and crack of lighting close by made Sarah jump and slide deeper under the sheets.

Relief at finally hearing the landlord’s voice quelled some of my fear, made it almost seem silly.

“Mr. Crawford? Hi, I don’t mean to bother you in the middle of the night, but we’re in Bungalow number six and heard a strange noise in the closet. We’re wondering if someone might have possibly left a cat here? Oh, okay. Yes, that’s probably it, thank you.” I hung up and relit the candle.”He says there are strays around and one could have gotten in. It’s happened before.”

“I did notice the cats hanging around when we first got here,” she said. “But still, in the closet?”

We both stared at the closet. I thought seriously about just leaving the thing in there until morning but what if it was hurt or hungry?

With a sigh, I slid my arm from Sarah’s death grip and picked up one of the shiny black rental shoes that came with the tux. Really, this was just to make me feel braver. I’ve had spiders laugh at me when I swatted them with a shoe, I knew it would be no match for a scared, trapped cat.

I grabbed the door knob and pressed an ear to the door.

I held my breath. Still nothing. Hm. Maybe I could just wait until morning. What would we do with a cat tonight anyway? Put it out in the rain? Better to just let it sleep in the dry closet.

“I think it’s settled in for the night, now,” I said, sliding back into bed.

“Oh, no,” Sarah said, climbing out of bed. “There’s no way I’m falling asleep without knowing what’s in that closet.”

“Here kitty kitty,” he called, moving into the bedroom. The candle had burned itself out and he stared at the items strewn about the room; a wedding gown thrown over the back of one chair, a tux jacket hanging on another, shoes, open suitcases. He slowly moved to the closet, where a woman’s nightgown lay by the door. Shoving it aside with his foot, he carefully opened the closet door and peered in.

“Ah,” he chuckled, throwing it open wide. The morning light shone on two trembling black cats. The one with green eyes hissed and howled, pushing itself closer to the body of the other one.

The cats pushed their way passed him and out the opened door.

Harold Crawford watched them go and then began to gather up the abandoned things in the room.  “Well,” he sighed, lifting the wedding gown from the chair. “At least you will be keeping your vows. ‘Til death do you part.” This is the one thing he told himself to feel better.

Only four more couples and his debt would be paid.