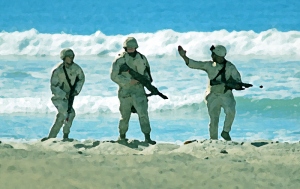 He stood, a weathered, brown sack of bones in front of the blue sea. Soggy white cotton pants hung, dripping seawater. This was his only attire. Hands were clasped behind his back as he watched with ancient eyes over the expanse of white sand–packed with umbrellas, coolers, and tourists–to the boardwalk.

A mother and child moved slowly toward him, picking up tiny shells and tossing them into the clear water.

His gaze turned first on the child, then on the mother. He tapped his wrist and the woman, smiling, offered him the time.

Bowing slightly, he once again fixed his gaze on the boardwalk.

Rebecca watched this with growing apprehension. She squeezed a glob of sun block from the tube and rubbed it on her two year old’s shoulders, still unable to take her eyes from the man standing still against the motion of waves and people.

Even in the warmth of a noon summer day, a chill rolled through her. The hair on her arms stood up. Glancing around at the other families packed in around her, she tried to make herself relax. No one else was paying attention to this small, harmless looking man.

But then he moved. It was fluid like the wind. One arm waved then he pivoted and began walking into the ocean.

Rebecca swept Jilley up from the sand, a cry of protest erupted from the startled toddler as she unsuccessfully tried to grasp her doll.

Her heart was pounding as she made her way to the edge of the ocean with her daughter. The man was now submerged up to his hips and still moving forward. She moved forward, too. Jilley squeezed her neck with tight little fists and whimpered as tiny, sensitive toes touched water. Rebecca glanced around at the others in the ocean, floating on rafts, throwing balls, splashing and diving under the small waves. Then she spotted a buoy and, submerging them both in the water except for their heads, paddled as fast as she could.

Once in a while, she glanced over at the man, who now swam in strong, even strokes out to sea.

She reached the buoy, breathing hard. It was difficult to stay behind it as it bobbed up and down and she tried to hold on to it with one hand.

“It’s okay, Jilley,” she whispered in her little girl’s ear. Brown strands of Jilley’s damp hair stuck to her mouth as she tried to keep her voice from shaking. “Mommy needs you to  be very quiet, no crying…”

The first explosion made her jump and duck behind the buoy. Jilley began to cry but no one would hear her over the screams of thousands of terrified people. Rebecca peered around her cover and reflexively held her daughter tighter as dozens of men rushed toward the crowds, rapid bursts of fire coming from whatever kind of guns they carried.  Another explosion off to her left sent a shower of sand and bodies into the air.

Rebecca could feel her legs cramping from treading water, she was hyperventilating and swallowing water as she struggled to keep Jilley’s head up.  Turning behind her, she saw a small boat moving toward the dot that the man had become.

She watched this, coughing the salt water from her lungs, singing to Jilley, trying to block out the sound of gunfire and panic coming from the beach, while keeping the buoy between them and the killers.

The boat slowed. The man climbed up into it. A white wake streaming behind it as it sped back out to sea.

Rebecca thought about Jilley’s father in Arkansas. He moved there six months ago for a job. She should have gone with him. Worked things out. He would never forgive her if the terrorists found them. If they took Jilley from him.

There were frantic splashes to her left and right as the people in the water swam in either direction, trying to escape the chaos. More rapid gunfire, some people floated instead of swam. Face down.

“I love you, Princess Pea,” she recited in her crying child’s ear. “I love you in the morning, I love you at noon…”

The thrum of a helicopter. The bleat of incoming sirens. Her legs were lead weights.  Her heart pounded like the gunfire.

And then it did.

A gull screamed in the long span of silence. Rebecca became aware of the breeze on her skin, tasted the salt in her mouth. The sun shone bright above them. Nothing had really changed. The world went on, despite the terror, the blood strewn sand, the families who lay dead or dying.

The world always went on. No matter how many malls, schools, airports or restaurants were blown up; no matter how many different ways man thought up to rip apart the lives of their fellow man, the earth kept spinning.

This was the first attack that she knew of on a crowded beach.

Her child lay still on her shoulder, eyes the color of the sea. open wide and staring at a woman in a red swimsuit, bloated and floating nearby.

Rebecca held her breath and turned, peering around the buoy.

This week’s attack was over.

Rebecca clutched her little girl and released her hold on the buoy.

24 thoughts on “Friday Flash: The Bouy”