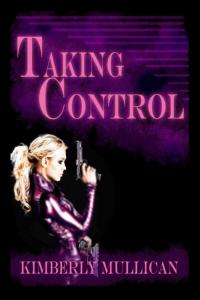 I’m so excited to have author Kimberly Mullican visiting today! Here’s a little bit about Kim:

Her journey began when she discovered that like most parents, hers happen to also be compulsive liars.  Since discovering that Santa Claus and the Easter Bunny were fictitious characters, she found it difficult to believe her parents when they told her “there is no such thing as ghosts.”  Hiding under the blankets, jumping at things that go bump in the night led her mind to wandering through the mysteries the world keeps locked away.  Surely, if there are ghosts, other things exist as well.

Kim worked in sales for many years before losing her sanity and transitioning to writing full time. Now working on her third novel, Kim has decided to dive head first into the literary world with her breakout novel, TAKING CONTROL.

KM: Thank you Shannon for inviting me to your blog!

SE: So, let’s talk about this book. I love the fact that it has a little bit for everyone. What inspired you to write it? Did you create the character first or the plot first?

KM: You’re not going to believe how this all came together. I had a terribly overwritten vampire book (Don’t we all? 🙂 …and it’s good, just horribly overwritten. After every single agent said, “no thanks” or nothing at all I started looking at what they WERE looking for. Strong female MC – check; gay/lesbian overtones – check; paranormal – check; Romance – well there is a little romance and sex, best of both worlds. (Don’t gasp – we all love sex, it’s okay.) The whole story started to form as I was reading what agents were looking for. The funny part is – I decided to go the Indie route instead. Who cares what the agents want really? I’m not looking for an agent. Not now anyway.

SE:  Is this the first book of a planned series?

KM: Well, when I originally wrote the book and purchased the ISBN, I did not label it as a series.  However, I have had emails from fans that asked when to expect the sequel. It may grow into a series, butI did not have that intention at the start. I have so many stories swimming around in my head that sometimes it is difficult to land on just one.

SE: Is this book set in the future where genetic engineering is the norm?

KM:  The government tried it and for the most part it was a failure.  Kat (and her twin sister) were anomalies.  Of course, they had to be special, right?

SE: How did Kat meet Grant?

KM: Grant was sent to her when she was born (left that part vague – I smell a sequel, or maybe that’s the dog???) (SE: sorry, sent her from the room)

SE: When did you first consider yourself a writer?

KM: Proud moment for me here . . . I was a successful compulsive liar as a child, so I would gather that I started writing/creating when I was very young.  I vaguely remember getting a kick out of seeing that people were believing my stories. Thankfully, I found a more productive outlet that lacks the jail time I could have otherwise been facing. (SE: Ah, you used your imagination for good not evil!)

SE:  Do you have any advice for other writers?

Seriously, I think the first thing a writer needs is very thick skin.  Having someone give you a bad critique is a tough pill to swallow.  Assuming you make it through critting and editing, then you have to put yourself out there.  I haven’t received a bad review yet, but it is coming.  How do I know?  Because you can be the most delicious green apple in the world, but not everyone loves green apples.  There will be a crappy review eventually, andI’ll have to accept that.

The other thing you need is a strong belief in yourself and your ability.  There is a lot of competition out there.  Don’t expect to write one book and get rich overnight.  There are only a few Rowlings out there, and it didn’t happen overnight for her either.

Edit, edit, edit again and again.  Get as many pairs of eyes on your work as possible pre-publishing.  Do your research on what the market is doing.  This is a business, not show and tell.  You must remember at all times what you’re trying to accomplish.  I get a bit racy online sometimes.  But I don’t write children’s books, so that is okay. But that’s my personality as well. I’ll never write YA – so it’s okay for me to address an older audience –as an adult.

The last bit – be yourself.  The public can smell a fake a mile away. (SE: not the dog this time!)  Be open, assist your writing community.
Thanks again for having me Shannon and good luck with KARMA’S A BITCH.  I still love that title!

SE: Thanks, Kim! Karma may be a bitch, but you most definitely are not!

Here’s where you can pick up your very own copy of TAKING CONTROL:

Kat Trueblood, genetically engineered medium and former CIA Agent, thought she had escaped the danger and drama of her previous life. She has a stable job as a paralegal, is dating her first girlfriend, and has plenty of time to spend with her best friend and guardian – a ghost named Grant.

In denial about missing the action of her former life, Kat’s thrust head first back into it when the Russian mafia – the same guys who raped and tortured her for two weeks during active duty – targets her and her family. The CIA forces her to choose between working with the FBI to catch a serial killer who is slaughtering area drag queens or leaving her family at risk.

Distracted by discovering Grant is in love with her and her girlfriend ending up on the suspect list, Kate finds herself as the hunted instead of the hunter. Captured by the killer, she must face her inner demons in order to survive and end the serial killer’s mayhem.