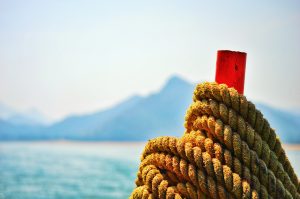 A tropical storm swirls out at sea. A boat tugs against its mooring, the vinyl rope stretching and relaxing as the waves rise, the water churns.

She watches this out of the rain-splattered window too close to the rising waters, which are beginning to splash over the concrete seawall.

The old center console fishing boat has never been used for fishing. It was a checkmark, ownership its sole purpose. The salesman’s words long ago echo in her ears now. This elegant machine is built tough for rough off shore waters. But the fish lockers remain clean of fish scales. The 350 horsepower engines have never chased down a single marlin or red drum fish, elegantly or otherwise. Potential wasted.

THE OTHER WOMAN. She can’t quite make out the blue lettering stenciled on the hull, but that’s what it says. Her husband’s idea. Better than Masterbaiter. Bow Movement. Fish N Chicks.  Men being clever always involve a bodily function or a woman.

Her spine is getting stiff, her eyes dry. But she cannot tear herself away from the window. Not even to board it up. Minutes turn into hours turn into hope. The ringing phone is a mosquito. She bats away the sound. It’s too late now anyways. She’s seen photos of boats after a storm surge. Boats turned on their sides, half submerged, no longer elegant. THE OTHER WOMAN is taking on water.  She can see her sloshing and splashing as the swells rise and fall. Panic crawls up her throat. But something else is happening, too. The rope is coming undone.

Will she sink or will she break free? This is all that matters now.

If she sinks, she will be reborn. Like those lost treasure ships, she could rest in the silt; become the whole world to a marine microorganism community; bath in silky green saltwater all her days; grow emerald coral and forest green algae. In Feng Shui green is the color of tranquility but also of renewal. Green would suit her new life.

If she comes undone, unmoored, that would be a new life, too. One of adventure instead of peace. Swept out to sea without a way to steer, without a way to control direction or speed. Madness, really. Alone. Uncharted. That did sound exhilarating. Her spine protested as she straightened it. Her twelve-year-old blind-in-one-eye tabby wound itself around her swollen calves, stretched out on her arthritic feet, anchored her to the floor with affection.

Time has become background noise, like the ringing phone. The storm is what they call “bearing down” now. Wind gusts rattle the window. She is squinting through sheets of rain and fogged glass at THE OTHER WOMAN. The sky is layers and layers of blue-black-charcoal-grey-black fury. The sea has erased the distance between them. She is not afraid.

Either way the storm will be her savoir.