The new book I’m working on, tentatively titled “Constellations of Alice” is heavier than the cozy mysteries I’ve been writing. But Alice has been bugging me for a few years to tell her story, so here I am.

One of the themes in this book is sex trafficking. I’ve been doing a lot of research on this (and sexual assault in general) and I can tell you, the statistics are shocking.

One in 5 women and one in 71 men will be raped in their lifetime.

This has to change.

And it can. I believe it can. But it has to start with changing the mind-set of our society.

This whole Donald Trump thing has blown up an important issue and started a dialog about sexual assault. The silver lining in a very vile, dark cloud.

His lewd comments about women and about being able to kiss them or grab their private parts whenever he wants amounts to sexual assault. The fascinating and disturbing thing to me was watching the fall-out as both men and women defended his talk as “locker room banter.” Including a GOP Senator who doesn’t think grabbing a woman’s genitals is sexual assault.

So what? All guys talk about women like this. Just words, right?

Well, NO. Wrong. Words are nothing more than an outward expression of a person’s mind-set.

Including a thirteen year old girl.

His ex-wife. (Who, under oath, accused him of violently raping her. His chief counsel’s defense was, “One can’t rape one’s own spouse.” Just. Wow.)

I’ll stop there because this is actually not about one man. The problem is bigger than that.

This is about the culture we live in. A culture where abusive masculine power has taken root and allowed men like this to terrorize women.

How do we fix this? Well, I can tell you the answer is not just laying down and accepting it. Nor is it women covering our faces or our bodies or staying indoors or being escorted by a male guardian everywhere we go.

The answer is men changing the way they think about women. Period. (And I know there are good men out there who don’t talk or think this way, but since 98% of sexual assault perpetrators are male, this has to be addressed as a male problem.)

It’s been encouraging to see the men who are standing up against this kind of abusive speech and behavior. But it’s time for the others, the “boys” who are being “boys” to grow up and become men. To drop your sense of entitlement. To see women as more than body parts there for your entertainment.

It’s  also time for women to stand up and stop tolerating this mindset as “normal” male behavior. It may very well be the norm right now, but when men know better they can do better. So please stop defending “locker room talk” as innocent and harmless. 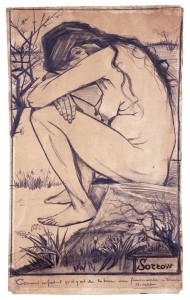